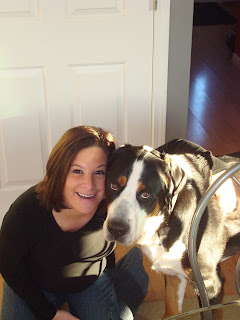 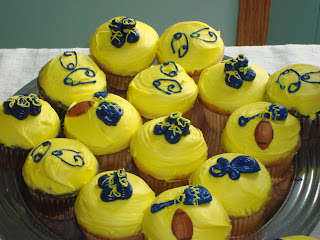 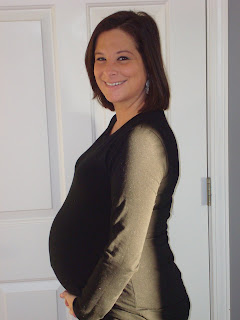 I cannot believe I have only 3 weeks until my due date!

I have posted a few photos; of me, the adorable cupcakes from my shower, and I felt like I hadn't had a picture of my "big boy" in there yet, so here is our other baby Payton! He won't get much blog time after the baby is born so I thought I would give him a shining moment!
Thanksgiving last week, made it difficult for me to post my weekly blog, and so much has happened since then. First of all we left for Thanksgiving in Madison on Wednesday night, Tim's whole family was there, so it was great to see everyone! Especially the little nieces, I can't believe how much they have grown and how their personalities are so different! They were definately fun to play with and watch! Thanksgiving was great, I don't think I have ever eaten as much as I did that night and I don't think Tim has either. There was a close call, where he actually thought he was going to throw up from eating too much! He just does everything to the max! We are so Thankful for our families, health and this little guy in there cookin away! I can't believe next year at this time we will have almost a 12 month old!

Friday morning, I was awoken by our big man payton! 5:30 Payton had two seizures. We stopped them with the diazapam. We just can't seem to get those darn things under control. He recovered fine and left a little early from Tim's parents so he could go home and rest.
Then We picked up my mom from the airport on Friday night.
Saturday was my shower! It was great to see people I hadn't seen in awhile. I have such great sister-in-laws and mother-in-law to throw me such a great party! It was a tailgate theme, which is very fitting since Tim has been obsessed with College football this fall. We had Michigan cupcakes and everything! Very cute. The idea of the Tailgate was my father-in-law Al! Good job Al! I got a lot a great stuff and felt more prepared with all the baby gadgets that you REALLY don't need but feel like you would be lost without. Thank you to everyone who came!
Monday afternoon, I was walking down the driveway to get the mail after we had gotten about 5 inches of snow, and I slipped and fell landed on my tailbone, then hit my head! I laid there for about 2 minutes, it was hard getting up and I was in shock that my big body had hit the ground that hard! Came inside laid down and tried to figure out what happend. My ass hurt so bad and the headache was throbbing! Called my doctor. She suggested I go into the ER. I was not to thrilled about this, but I needed to listen to her. Got checked out at the ER, nothing broken just bruised! They then sent me to the Columbia Center, where I am going to give birth. They told me they were going to monitor myself and the baby for the next four hours. I was there with my mom for a few hours, then Tim came. I was ready to go home and eat! I was having contractions, but couldn't really feel them. They were about 6 minutes apart and lasting about 1 minute. The baby was moving around good in there and his heartbeat was good. My doctor came in and said she wanted to keep me over night. Now I was not happy! I understood that they wanted to monitor the baby, but that was the last place I wanted to sleep. Sleeping, was not really what I did. I listened to the baby's heartbeat most of the night, (which was reassuring) and tried to get comfortable! I was glad when it was morning. My doctor came in again, said the Baby looked perfect and my contractions slowed down. So I was leaving the hospital with out a baby, which I was a little dissappointed about, but he's not done in there, and I would rather him let us know when he is ready!
So that was monday! My mom left the next day! I was a little crabby with her and Tim towards the end there so I apologize. I need to get better at handling things that are out of my control! So thanks for putting up with me both of you!
Other then that recovering fine, other then being a little sore, feeling good! I had an appointment today and doctor checked me again, I am almost 2 cm dialated and 60% effaced! So he is making his way down, which I can feel in my hips!
I will keep you all posted on if Baby Marco decides to make an early arrival! Otherwise, I will post next week!