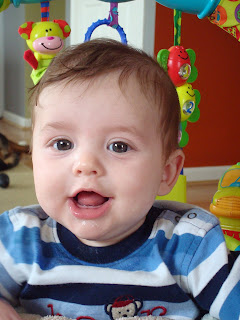 Last weekend Donovan and I spent the weekend in Mankato, which is where I started my college career 10 years ago! This time was a lot different then 10 years ago when I started for many reasons. This time I brought Donovan with so he could meet Amanda and Liz, whom of which he hadn't had the pleasure meeting yet. It was also different because my tolerance for alcohol has diminished almost completely. It took me two/three days to recover from a night of beer and shots. I used to be able to do that 3-4 nights a week, maybe more, and now I am not sure if I could ever drink again. I will spare you the details of the plane ride home, but lets just say it was not good. And quite embarrassing. Anyway. This is a story my son will hear when he is out of high school, because he will hold it over my head his entire high school career. I would post pictures of the weekend, but because of my frame of mind and physical condition, I broke our camera and couldn't download any photos. Other then that is was a gerat weekend, we took a walk around campus, went to all the old bars and some new ones. Talked for hours. It is amazing how I can go months with out seeing these girls and we pick up right where we left off. I have been blessed to know such amazing women, who have truly seen me at my best and worst and are still around! THANK YOU!
There is a photo of him at 5 months. Which is the cutest photo ever. Also there are some videos of him getting really frustrated. Which I think is adorable, he doesn't think it is so funny. The first one is of Donovan attempting to crawl. I think he is going to do it very soon. He hates that he can't figure it out yet, he is just way ahead of what his body is ready for! What a go getter!

The other video is his love/hate relationship with the apple on his exersaucer. I literally cannot have this apple on the exersaucer while he is playing with it or he starts crying within 5 minutes. If the apple is not on the exersaucer, he could play in it for hours! He wants the apple, but once he has it is gets upset. It is quite funny.